Beyond Earth vs Alpha Centauri

This is now an incredibly cold take, but I finally wanted to write down my thoughts on Civilization: Beyond Earth (BE), and how it compares to Sid Meier's Alpha Centauri (SMAC), which is sort of its predecessor.

It's probably not surprising that I find BE a disappointment, but I want to spell out the reasons why. It's easy to compare your nostalgia for an older game with the reality of a newer one, a comparison where the new one will inevitably come up short. So I re-played both of them, and want to give as concrete reasons as possible for my disappointment.

I want to especially focus on the writing and the world-building here. Yes, BE's gameplay is probably too close to vanilla Civ V, its AI opponents too passive, its endgame sluggish. But SMAC was hardly perfect.

No, my main complaint is that BE is a generic and anodyne creation. SMAC presented a genuinely interesting world I would love to visit but possibly not stay in. BE feels muted and devoid of ideas and character. Let's look at two aspects: the factions, and the world the game is set in.

In SMAC, you are presented with seven very different, very ideological factions. They disagree with each other in a complex web of ways, and they all have their own vision for the future of humanity.

While some of their beliefs are a lot more palatable than others, you can see that there is something attractive about all of them. Yang's heady mixture of Nietzsche and Confucianism can appeal to a certain kind of seeker. Miriam's fundamentalism provides clarity in a frightening alien world. Nor are there many unequivocally good people: Deirdre's Gaians sound nice right until you realize that their approach to warfare is to have alien worms psychically stun you and implant their eggs into your brains.

Probably the nicest and most straightforward faction is Pravin Lal's UN, who represent something like the original idea of the mission to the planet. And even Lal, who appears to be a waffling bureaucrat a lot of the time, has a human rights agenda that he will defend to the death. 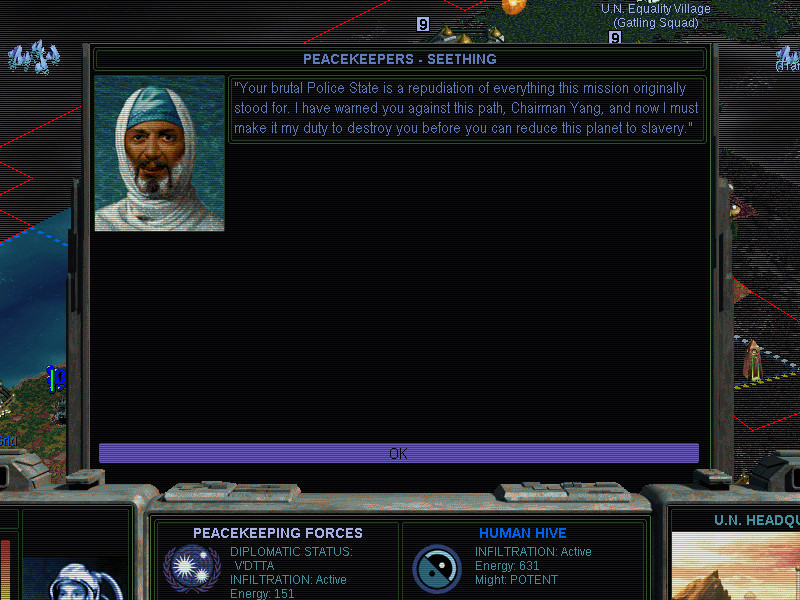 Each of the faction leaders also has a biography. We know where they came from and what experiences shaped their beliefs.

Meanwhile, in BE, we have a number of factions that appear to have been created by taking a world map and drawing random circles on it. There's Franco-Iberia, two adjacent European nations lumped together. There's ARC, a generic megacorp. There's Polystralia, an amalgam of Polynesia and Australia. We're told that this is the far future and politics and society have changed, but these factions still don't make any sense. They are disconnected from history. What do they stand for? What are they like? 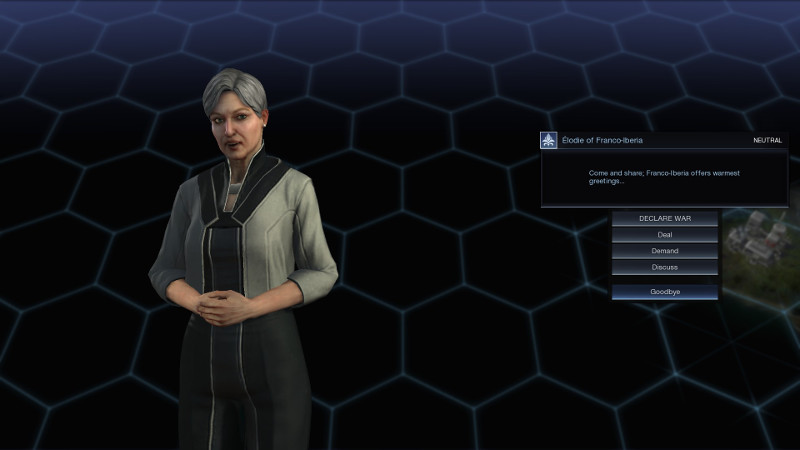 Another faction, Brasilia, appears to be the vaguely military one. That's all we get. SMAC's Spartan faction feels way more real.

Yet another, the African Union, is at least named for a real-world political project. What do they get? A growth bonus and an Old Earth Relic building. Why do they get that building? It would have been easy to give them an actual set of beliefs to explain this. Here, I'll do it for you now: They believe that it's important to remember humanity's roots on Old Earth, not in order to stay the same, but to understand how the present is different. They can start out half their sentences with "On Old Earth, X was the case, but now Y." Done!

In BE, everyone speaks in platitudes. Look at this bit of "flavor" text:

Who are those people? Why do we care? Creating distinct identities would not have required any mechanical changes, just more interesting flavour text. It would not have broken the budget.

According to Wikipedia, the first thing the creators of BE did was to read the books in the reading list at the back of SMAC's manual. It's a great list, an excellent introduction to SF writing if you need one. Somehow, it didn't work, as they ended up creating this pap. And maybe these personalities and conflicts and ideologies did exist in their minds, but in that case, they failed to express them in the game.

Much the same problem affects the world you play in. In SMAC, the planet - Chiron - has had a fair amount of work put into it. We know its size, gravity, atmosphere. We know how this influences the native life. The alien xenofungus, the telepathic brain-eating mindworms, and the living planet are fairly SF-tropish, but they provide a distinct flavor. It's a specific alien world with specific challenges and opportunities.

In BE, the planet you land on is an indistinct mess of SF tropes. There's floating rocks, which is more science fantasy than SF. There's petroleum, because apparently this planet had a carboniferous period?

The aliens are green bugs. Green bugs, pretty much the most generic type of alien! The terrain is a lot prettier and more varied than in SMAC, but it's just forests and swamps and desert and tundra, like back on Earth.

Chiron is a planet I can imagine, a strange, often desolate and horrible place. The BE planets are just sci-fi planets with bug aliens and floating rocks.

The crux of the matter is that Civilization is explicitly a game about the "march of progress" view of history. Knowledge doesn't get lost. Empires are only conquered and never collapse. There is no depletion of natural resources or exploitation of people. Politics exist but only as surface-level flavours that produce some bonuses or make the AI opponent like you less.

Imagine a version of Civ that's based on a Marxist or environmentalist reading of history. Or just a more nuanced one.

As it says in the title, BE isn't a sequel to SMAC. It's Civilization 5 on another planet, and it has to subscribe to the march of progress concept of its parent game. The game itself and its factions can't think too closely about what went wrong on Earth, because that might undermine this idea of progress. Everyone has to speak in managerial platitudes about "moving forward" and "great challenges", because that's all that's left if you're not allowed to examine how "progress" is an artificial idea used to paper over all kinds of harm and destruction.

I'm tentatively interested in Civ 6: Rise and Fall, because it may finally be a departure from this "progress" idea, but it's pretty deeply embedded in the game by now.

Civilization: Beyond Earth isn't a terrible game. It's uninspired and disappointing, and I kind of wish it had been terrible, because that might have galvanized someone to do an interesting modern take on SMAC. As it stands, it's good enough that Firaxis can say "look, we made Civ in space" and not revisit the idea for another decade.

If you want to play an interesting game about alien worlds, all I can recommend right now is the small but entertaining Seedship. It's not Alpha Centauri 2, but at least it has flavor.