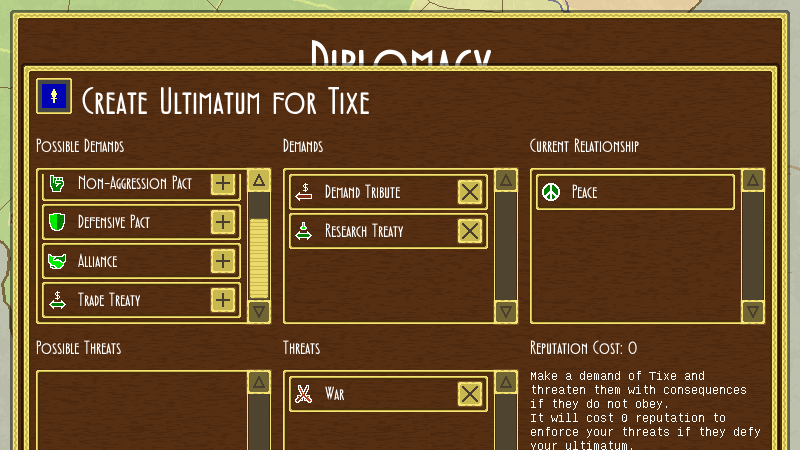 Back nine months ago I wrote an update on the upcoming diplomacy features for Airships. Understandably, you'd like to know how they're getting along. The short version: yes, they're still coming, things just take forever, ugh.

As a matter of policy I don't want to give you a detailed breakdown of how I spend my time, because that way lies madness and frustration for players and developer. But suffice it to say that life and hardware failures get in the way sometimes.

And I'm basically transforming Airships from a ship-building game with a simple online battle map into something more like a fully-fledged grand strategy game. These usually are made by teams, not individual developers. So all of this is a lot of work.

Where is the big diplomacy update now?

Diplomacy between human players is done, as is cooperative multiplayer battles. I spent a lot of time doing some careful testing to ensure that this actually works right: players ending up on the right side of battles, logic like "if you declare war on someone, you also declare war on people they have a defensive pact with" working correctly.

What's next is a bunch of secondary features meant to fix pain points with the strategic game as it is, and to flesh it out.

The first one is a supply system intended to prevent what's called "doom stacks" in Stellaris - players simply lumping all of their ships into one megafleet that zips from city to city conquering, not bothering to rebuild or defend its conquest. You end up with a bunch of doom stacks chasing one another, which isn't all that much fun.

The second is a resources system. Towns and cities will produce different resources required for effectively making certain modules and armour. (You'll always be able to make anything you have the tech for, it may just get expensive.) Right now, each place you can conquer is much like any other, but with resources, it will matter what you actually need.

The third is a system for upgrading towns and cities, specializing them and increasing your output.

Then, I want to rework espionage. Spying was meant to be a catch-up mechanic, but it doesn't really work as that, nor is it very fun. So I'll either make it work or maybe just remove it from the game.

Finally, I need to update the AI so it actually understands all these new concepts.

I understand that you're probably excited to try out multiplayer and diplomacy, but I do want to deliver all those things at once as a well-balanced package. This is mostly because I don't want to go up to people and say "try multiplayer, it's really good now", while I know that there's still gameplay issues I haven't addressed.