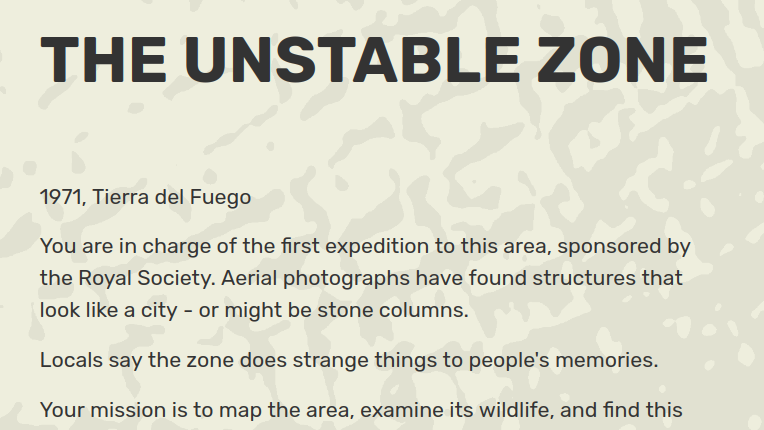 A rather verbose postmortem of my Ludum Dare 49 compo game, The Unstable Zone.

I was really happy to be able to do Ludum Dare outside the house again. I tried doing game jams while isolating at home, and I just can't get into the spirit of it. A jam is a bit of an altered state, and it's hard to get into an altered state if you're sitting on a sofa at home and the dishes need doing. Without resorting to drugs, I mean.

So I did Ludum Dare at the local gamedev incubator thingy I co-founded, Swiss Game Hub. About eight people turned up at various points, working on around five games, rather fewer than before, probably in part because there was a big games event going on at the same time. (And yes, we were all verifiedly vaccinated, that's why we could do it in person again.)

I believe I voted for Unstable in the preliminary round and then against it in the final round, so I had mixed feelings. But that's how jam themes always work: the moment you find out, you are convinced it's the worst possible theme and your brain refuses to come up with any but the most obvious interpretation. In this case, stacking shapes on top of each other.

We spent a bunch of time at the hub discussing the theme, enumerating things that could be unstable (buildings, people, prices, the ground, reactors, relationships, reality...) We also chopped up the theme in a number of ways. One of us suggested "Unstab Le", a game where a guy called Le has been stabbed and you have to uh unstab him. We couldn't find a good mechanic for it, but I still love the idea.

In the end, I picked the idea of an unstable economic simulation that would spiral down into a collapse over the course of the game, as a kind of antithesis to the usual build and progress style of economics games. Here things collapse and all you can do is survive. An interesting idea that I want to revisit, but after making a few notes, I realised that it was an order of magnitude too complicated. Just making the basic economic simulation would have taken me two days, never mind any actual gameplay.

So we broke for lunch, sat outside, and talked about our progress. My fallback idea was to make a game about unstable reality, an expedition game best described as "Curious Expedition meets Annihilation". You'd crawl around a map with your expedition and weird, horrible things would happen. After lunch, my friend (and previous co-jammer) Kay came by and pushed me to actually figure out the plot of this thing. We ended up playing out maybe half of the game's plot as a pen and paper session.

Things started to come into focus. I again scoped things down to the relevant parts, getting rid of the idea of being able to move around a map, and instead going for a branching narrative game.

Having played through the first half of the plot, and mostly figured out the second half, I outlined the game by placing passage stubs in Twine. I started writing some of the interactions and thought up some stats: stress, wariness, tiredness, and knowledge.

The next day, I continued laying down the game's interactions, mostly sticking to summaries in the writing. By the early afternoon it was possible to play through the game, so I inflicted it on my partner, who was at the hub to hang out and write. Playtesting quickly resulted in adjustments in balance and details, but the overall plot was already solid.

After more writing and playtesting, I had a more or less complete game by dinnertime.

After dinner, I determined that I had enough time to make a soundtrack, so I got out GarageBand and my little MIDI keyboard, and started hitting buttons. I started out with some slow classical guitars to suit the game's setting in Argentina. Later on, the music switches to a creepy droning synth underlaid with slowed-down insect noises. The soundtrack could clearly use some more work, as the transitions and pacing aren't great, but it brings across the game's mood.

I uploaded the game with 24 minutes to go before the end of the compo. As you can tell from the above, I worked at a moderate intensity, which, well, I'm not in my 20s anymore.

(Note that it's spoilers from here on, so if you haven't, do play the game first.)

The game chronicles a dangerous expedition into the "Unstable Zone", a remote area that plays tricks on people's perceptions and memories, and is inhabited by strange insects that rapidly mimic anything they come across, including binoculars, tape recorders, and people. The player explores the zone, balancing the expedition members' levels of stress and tiredness against acquiring enough understanding of the place to know how to deal with it.

The bridge the expedition uses to enter the zone collapses or vanishes, and they are forced to take the long way back, which brings them into potential conflict with the mimic insects, who have started to emulate the shape and behaviour of previous expeditions, including a deadly curiosity and potentially violent behaviour.

The structurally clever thing I wanted to add was a flashback with decisions that would change the state of the world and the available solutions once you flashed forward again. So as your memories get more muddled by the zone, you flash back to an expedition nearly a decade earlier, where you can choose whether to leave behind useful equipment for your present self, and how you interact with the mimics, which is then reflected in their behaviour towards the expedition in the present day.

Ultimately, there are a number of ways to escape alive, and yet more for at least some of the expedition to escape. The overarching plot is fairly linear until the final decisions about how to escape, but there's a lot of different paths in practice, because your decisions affect what happens in detail, and what is possible later on. This is a technique I copied from Choice of Games, whose (much longer) narrative games avoid having early branches by having the player set up details like stats and relationships through most of the game before branching heavily towards the end of the game. This way, player choice matters, but you don't have to write a million words of branching plotlines.

As for the plot and setting, it's obviously heavily inspired by Annihilation. Another influence is the lesser-known The Sick Land. I hope I did a decent job of making it not entirely derivative. All three belong to a genre of "strange zone" literature which also includes Roadside Picnic, Alice in Wonderland, Heart of Darkness, and so on.

I tried to improve on Annihilation in having a clearer underlying relationship between the core weird stuff in the zone and the way it presents itself to the reader. One of the weaknesses of Annihilation - which I generally greatly enjoyed - is that while there's a lot of cool weird stuff happening, it doesn't really ever tie together in a satisfying way. In my game, there are two core strange things: the distorted perception of the expedition members, and the mimic insects. This isn't perfect, as I think the perfect strange zone story would have a single strange thing at the center of it, which, once revealed, perfectly explains all the many weird and terrifying things that happened. (And that isn't "aliens/a wizard did it for unknown reasons".)

Except that in the comments, The Lame Brain suggested that your party are actually mimics, but as part of being mimics you also have mimic-memories from the original party. Which I think is a great twist - and it reduces the number of weird things to just one. The discontinuities in perception are because you aren't human. You're an insect imitating human behaviour based on a jumbled set of experiences.

I might end up making a post-jam version with more content and an improved soundtrack, but for now, I'm pretty happy with it.